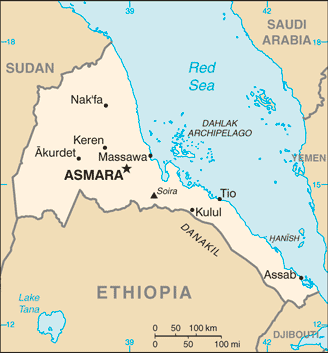 Showing 16 headlines from the past seven days
Previous Pause Next
Eritrea: Training on Administration and Finance
08/13/2022 - 19:00

Download logo The National Union of Eritrean Women branch in the...

Download logo Voluntary blood donation with the aim to enrich the...

African Business Magazine
Nowhere to run: the plight of Eritrean refugees in Ethiopia
08/11/2022 - 17:24
Eritrean refugees in Ethiopia are caught in a conflict in a country...
The Conversation - Africa edition
Eritrean Women in Business - Networking With African Counterparts to Find New Markets
08/11/2022 - 10:00
[Shabait] COMESA (Common Market for Eastern and Southern Africa)...
All Africa, All the Time.
AllAfrica News: Eritrea
'We Shouldn't Be Afraid of Trying New Things.' Isak
08/11/2022 - 10:00
[Shabait] Our guest today is Isak Abraham, a young artist who has...
All Africa, All the Time.
AllAfrica News: Eritrea
Eritrean Community Festival in United States (US)
08/09/2022 - 20:47

Download logo The 48th annual Eritrean community festival in the...

Download logo Eritrean community festival in Toronto and its...