Mauritania Listeni/mɔrɪˈteɪniə/ (Arabic: موريتانيا‎ Mūrītānyā; Berber: Muritanya / Agawej; Wolof: Gànnaar; Soninke: Murutaane; Pulaar: Moritani; French: Mauritanie), officially the Islamic Republic of Mauritania, is an Arab Maghreb country in West Africa. It is bordered by the Atlantic Ocean in the west, by Western Sahara in the north, by Algeria in the northeast, by Mali in the east and southeast, and by Senegal in the southwest. It is named after the ancient Berber Kingdom of Mauretania, which later became a province of the Roman Empire, even though the modern Mauritania covers a territory far to the south of the old Berber kingdom that had no relation with it. The capital and largest city is Nouakchott, located on the Atlantic coast. 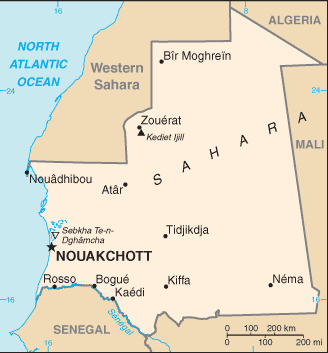