Kenya, officially the Republic of Kenya, is a sovereign state in East Africa. The capital and largest city is Nairobi. Kenya lies on the equator with the Indian Ocean to the south-east, Tanzania to the south, Uganda to the west, South Sudan to the north-west, Ethiopia to the north and Somalia to the north-east. Kenya covers 581,309 km2 (224,445 sq mi) and has a population of about 44 million in July 2012.The country is named after Mount Kenya, the second highest mountain in Africa.
From Wikipedia 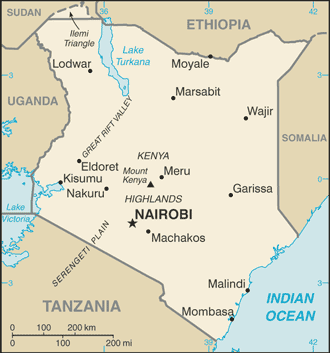 Showing 1 headlines from the past twelve hours
Previous Pause Next
Nation's Year on Year Inflation Rises to 5,78%
02/28/2021 - 09:02
[Capital FM] Nairobi -- Kenya's year-on-year inflation in February...
All Africa, All the Time.
AllAfrica News: Kenya