Guinea Listeni/ˈɡɪni/, officially the Republic of Guinea (French: République de Guinée), is a country in West Africa. Formerly known as French Guinea (French: Guinée française), it is today sometimes called Guinea-Conakry to distinguish it from its neighbour Guinea-Bissau and the Republic of Equatorial Guinea. It has a population of 10,057,975 and an area of 246,000 square kilometres (94,981 sq mi). Forming a crescent as it curves from its western border on the Atlantic Ocean toward the east and the south, it shares its northern border with Guinea-Bissau, Senegal, and Mali, and its southern border with Sierra Leone, Liberia, and Côte d'Ivoire. The sources of the Niger River, Gambia River, and Senegal River are all found in the Guinea Highlands. 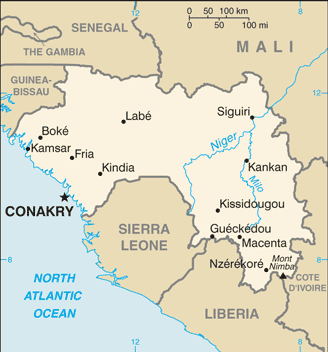 Showing 6 headlines from the past two days
Previous Pause Next
6-Week Maritime Security Training Opens in Accra
01/26/2023 - 09:38
[Ghanaian Times] A Six-Week maritime affairs and security training...
All Africa, All the Time.
AllAfrica News: Ghana
Guinea Worm Eradication Effort Enters 'Most Difficult' Phase
01/25/2023 - 17:46
The Carter Center said Tuesday that only 13 human cases of Guinea...
The latest news and analysis from Africa.
Voice of America - Africa
Guinea worm disease could be second ever human illness to be eradicated
01/25/2023 - 13:20

As cases fall, the condition that once affected millions of people...

As cases fall, the condition that once affected millions of people...